What I’m up to this week

Giving up alcohol for Dry January, living on £1 a day for Live Below The Line – read all about it here

This article first appeared on LabourList on Monday.

Ever looked at a Labour leaflet and thought ‘I could have designed a better one than this’?

Ever spent half an hour of your life inviting all your Facebook friends to a phone-bank?

Ever thought you could do more for the Labour movement than knock on doors?

If your answer to any of the above is yes, then Labour Exchange is for you.

My friend Matt Doughty and I launched Labour Exchange yesterday after a lot of hard work. (Mostly by Matt. I don’t do coding. I just sent him a lot of emails saying things like “Ooh we need a logo!” and “Can we make it more like Fitocracy?” and “Why isn’t it finished yet?” ) NowI’d like to tell you why we made it.

The Labour Party’s members and supporters are our greatest asset. In fact, they’re – you’re – bloody awesome. I’m not exaggerating. In eleven years of membership, through by-election after by-election, conference after conference, a leadership campaign and thousands of tweets, I have met members and supporters from all over the country: people from all walks of life, with every conceivable skill, every kind of expertise.

But when all these multi-talented people come along to a branch meeting or a street stall, are the talents they bring with them put to good use? In my experience, usually not. They’re more likely to be sent off out on the doorstep and told to watch out for the dog at number 11.

Now, speaking to voters is without doubt the most important thing we do. But if it’s all we ever ask our members and supporters to do, we are missing one hell of a trick.

We created Labour Exchange because we believe Labour people have more to offer.

On Labour Exchange you can ask for help – or offer help – with everything from leafleting to organising an event. Think a sort of Labour Gumtree. When you log in you’re asked to list ways you can help Labour (and are willing to do so for free). This ranges from leafleting and door-knocking to more specialised skills: web design, speechwriting, fundraising. (Add as many tags to your profile as you like – if there’s something you can do that’s not already listed, suggest it to us over on the Feedback page and we’ll add it in.)

Other users can then search for someone with your skills – or they can create posts about a specific project. If it’s something you can help with, it will appear in your newsfeed.

What’s more, you can use Labour Exchange to create campaigns and campaigning events – and there’s no need to spend half an hour inviting all your friends, like on Facebook. The event will show up in the newsfeed of anyone in the right area who is interested in campaigning.

In Manchester we’re hoping to use Labour Exchange to help organise Lucy Powell’s campaign for Manchester Central. We’d love it if Labour comrades around the country can use it for your campaigns too (if you’ve got a #labourdoorstep session planned for this week, click here to make it a Labour Exchange event) – but don’t forget that you can do more than that. It’s called Labour Exchange for more than one reason. It’s a place to exchange skills – and to avoid the wasted potential we associate with the dole queue. 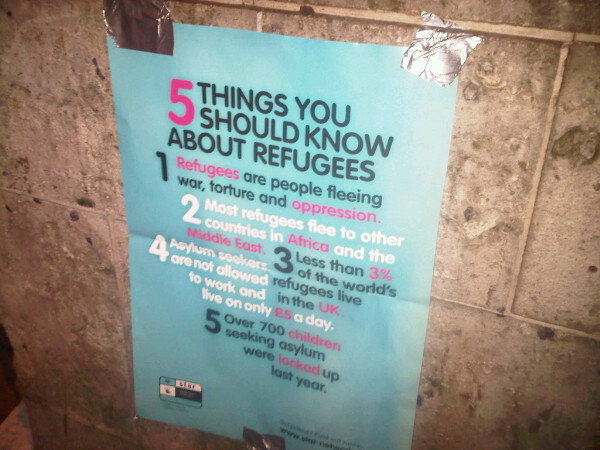 Just got time for a quick blog post before a Rusholme branch meeting. I meant to link to this yesterday: an MEN article by fellow York alumnus Raf Sanchez, on his night spent sleeping rough as part of Amnesty UK and STAR‘s ‘Sleep Out‘ campaign. Have a read.

I went along on the night myself – somewhat last minute, as I only heard about it at 10pm – stayed until about 3am and then went home, rather than sleeping on the Steve Biko steps. Fair play to MPs Kate Green and John Leech who stayed all night: I’m afraid I didn’t go up to John Leech and ask how many more people would be made homeless because of the welfare reforms of the Tory-led government he supports, as some of my Twitter followers suggested. There’s a time and a place…

The event aimed to raise awareness of the plight of rough sleepers but in particular asylum seekers, often forced into homelessness by the destitution policies of successive governments.

This is all part of Still Human Still Here, a campaign to allow asylum seekers to work. Amnesty UK and STAR say this would lift thousands of asylum seekers out of poverty as well as reducing the burden on the taxpayer. You can read more here.